Apartments for Rent in Um Uthaynah

Um Uthaina, the Beautiful side on West Amman

Like other West Amman districts that are classy and luxurious, Um Uthaina is also considered to be one of those. Here people can find a variety of old and new buildings mingling together in harmony. The tranquility of this district distinguishes itself from other places in Amman, making it suitable for residential space like apartment and villa. Moreover, land and commercial units are also available throughout some locations such in the main commercial street that leads to the Sixth Circle.

The situation of this district is ideal and very special; it is surrounded by other beautiful districts such as Al Madinah Street, Abdoun, Shmeisani, and Wadi Al Seer. Moreover, it is divided into two parts: the eastern and the western part, and these two parts are separated by King Faisal Bin Abdul Aziz street – which starts from Mecca street and ends in the Sixth Circle.

The Sixth Circle separates Um Uthaina from Al Sweifieh. As for the eastern part, Mecca street separates this area from Al Rabieh, it is also close to Khalda, Um Al Summaq and Abdoon. so it is close to popular malls like Mecca Mall, Sweifieh Mall and Taj Mall, and the most important advantages of this beautiful district is its closeness to facilities, restaurants and everything that Amman residents may need. 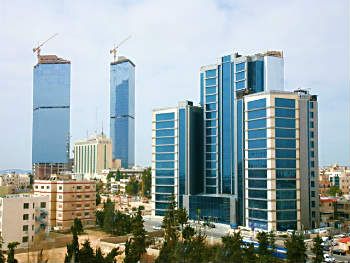 Apartments for sale and rent are widely available in all parts of this attractive district. Furthermore, the demand is continuously increasing especially during summer holiday and vacation when people from different countries are coming to spend their time in Amman.  Here, they prefer to find rental accommodation around Um Uthaina because of its strategic location surrounded by facilities and convenient access to some touristic spot in Amman. For people who is staying longer in this area, renting the most affordable 2 bedroom unit will have an approximation rate of 600 Jordanian Dinar yearly. The more luxurious unit will cost you an annual rate above 5000 Dinar.

Prices for vertical residential unit in Um Uthaina area are considered to be higher if compared to the Eastern part of Amman where the majority of Amman's working class residence live, but affordable as a middle to upper class district when compared to some other luxurious areas in West Amman. These prices varies according to condition and the age of the building itself. For instance, to own an apartment in this district you need to prepare a budget starting from 70.000 for 2 bedrooms type, up to a whooping 500.000 Dinar for the luxurious 500 meter square vertical unit. Some good tips if you are thinking of buying or renting an apartment in Um Uthaina, do not forget to have a peek on the location especially around main streets during rush hour and quiet hour to have the idea of the accesibility from the neighbourhood to your activities.